skip to main | skip to sidebar

We are Division 5 runner ups!

While this is unconfirmed in writing, I have just called Cuesports and was told that PSRC has won SP by the score of 7-4. With a bit of calculating, that means that, given that the news is correct, here is the standing after that little piece of news.


By looking at the last column, it means that SP club is at 18 points and have played all their games, while we are at 20 points and have 1 more game to play (Seletar this coming monday).

Even if PSRC win its last game it will put them at 19 points, which means that we can afford to lose.

Lets hope that the 7-4 score to PSRC is true!
Update: PSRC did indeed won 7-4, but British Club has yet to send in their results or it wasn't update yet in Cuesports website.
Posted by lbs at 8:48 PM No comments:

An update from Division 5 side...

After our 4-0 victory over HDB on Monday, we are 1 point behind SP club with 1 less game. Our remaining opponents are British Club and Seletar, while SP’s sole game left is against PSRC (Prison Sports).

Statistically, we have a very good chance to get 2nd place in Div 5. We will definitely need a convincing result against BC. This will put us 2 points ahead of SP club on equal games. The current frame difference is +18 (63-45) for SP, and +23 (63-40) for us. If we get a 8-0 victory, and provided that the competition prioritize difference over frames won, then we would require a draw at most at Seletar.

Lets look at some maths here. If SP is to win PSRC 8-0, that would mean that they are running on a +26 difference/71 total frames won. Either way, we are currently favorites to get 2nd, and more importantly, a trophy for everyone in the team playing the last time for NTU.

However, we need a good result against British Club (away) and a victory against Seletar (away game as well).

Cmon guys! Even though I can’t play, I am available everyday this week and weekend next week for training!!!

Source:http://en.wikipedia.org/wiki/Ronnie_O
Posted by Jerry Quek at 10:11 PM No comments: 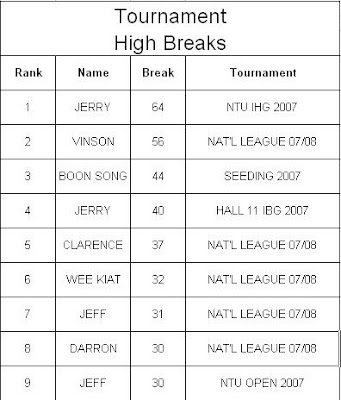 Posted by Jerry Quek at 9:53 AM No comments:

Hi all,
Please be informed that there is a meeting next monday 22th 7pm at nyh. Objective for this meeting is to finalise team formation for our upcoming National League which we will be playing in div 3, 4 and 5 this year. Please collect your shirt and jacket on that day also.
Steven
Posted by lbs at 5:35 PM No comments:

First of all, I think we can have more people helping to author this blog.
Just send Jerry an email or stuff and provide your gmail email to him, and he can add accordingly (I do not have the rights). We can include stuff discussed in the emails here as it can be troublesome to search sometimes. Ladies and Gentleman, by now you should have seen the ranking. This is how the points and handicap are allocated. The handicap system will be applicable to all internal team tournaments conducted; this is to make the game fairer. The handicap will be up to a limit of 30.
Posted by Jerry Quek at 9:11 PM 1 comment: 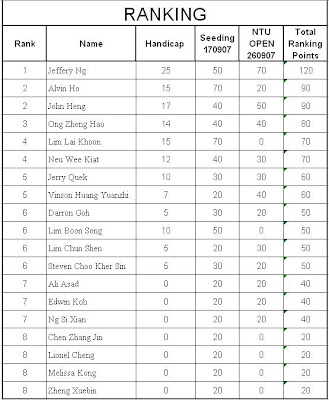 Posted by Jerry Quek at 9:09 PM No comments: 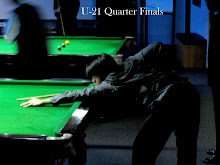 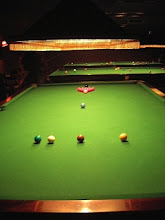